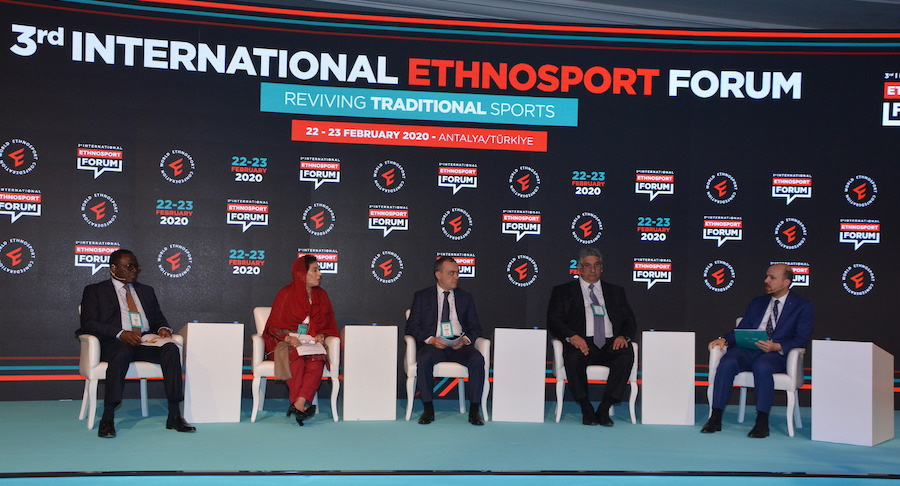 The third forum was conveined in Antalya under the theme of “Revival of Traditional Sports”, and concluded after two days of busy schedule with the publication of the Forum’s Final Declaration.

The forum, which has had 200 participants; including ministers, government officials, federation delegates, and academics from 49 countries met up between 22nd – 23rd of February to shed light on the future of traditional sports and contributed with valuable insights had drawn great attention.

The forum; organized by Word Ethnosport Confederation under the presidency of Necmeddin Bilal Erdoğan, held joint studies for the future of traditional sports and games of many countries. Many topics that will contribute to “Revival of Traditional Sports” were discussed in various panels and sessions.

In the opening statement delivered at the first day of the Forum, WEC president Necmeddin Bilal Erdoğan welcomed guests from different parts of the world. In the opening programme Youth and Sports Minister Mr. Dr. Mehmet Muharrem Kasapoğlu, the Governor of Antalya Mr. Münir Karaloğlu, and sports and youth ministers from attending countries delivered speeches. At the forum, Youth and Sports Ministers from 8 countries, together with World Ethnosport Confederations President Necmeddin Bilal Erdoğan, had signed a “joint declaration”. The first day, then, had proceeded with panels. At the end of the forum, WEC President Necmeddin Bilal Erdoğan had stated and underlined the crucial role played by traditional sports in respecting other cultures and international dialogue. The forumconcluded after publishing the final declaration; followed by certificate ceremony held in honour of attendees, and closing speeches.

This Year the International Ethnosports Forum was Held in Turkiye.
The first International Ethnosports Forum was held in 2018 at Antalya, the second in 2019 at Almaty, Kazakhstan. The third forum held this year between 22nd and 23rd of February in Antalya, Turkiye.
Necmeddin Bilal Erdoğan: “We would like to draw attention to the cultural richness of the entire world.”
In the opening statement, WEC president Necmeddin Bilal Erdoğan welcomed guests from different parts of the world: “In an age where everything is getting monotonous and uniform, and values are set to be lost; we have to discover and maintain our roots, and to regreen from those. Because this is the only way we can ensure a world where each society sprout and live with their unique colors.”
Together with WEC; Youth and Sports Ministers from 8 Countries Signed the Traditional Sports Antalya Declaration
At the forum, Youth and Sports Ministers from 8 countries, together with World Ethnosport Confederations President Necmeddin Bilal Erdoğan, had signed a “joint declaration” to ensure development, support and popularisation of “traditional sports” in national and international levels. This declaration will go down in history as “Traditional Sports Antalya Declaration”.

The Final Declaration for the 3rd International Ethnosports Forum
“2020 Traditional Sports Antalya Declaration” has been announced. In the declaration, participants reached a consensus on agendas: governments’ role in strengthening and preserving traditional sports; steering the youth towards traditional sports, and developing their skills through them; cooperation between universities, federations and clubs; as well as discussed their views, ideas and problems under the theme “Revival of Traditional Sports”. After the gathering and discussion 3. International Ethnosport Forum final declaration has been anounced and published. The Forum has been concluded after declaring that the next one will be held in 2021 at Baku, Azerbaijan.