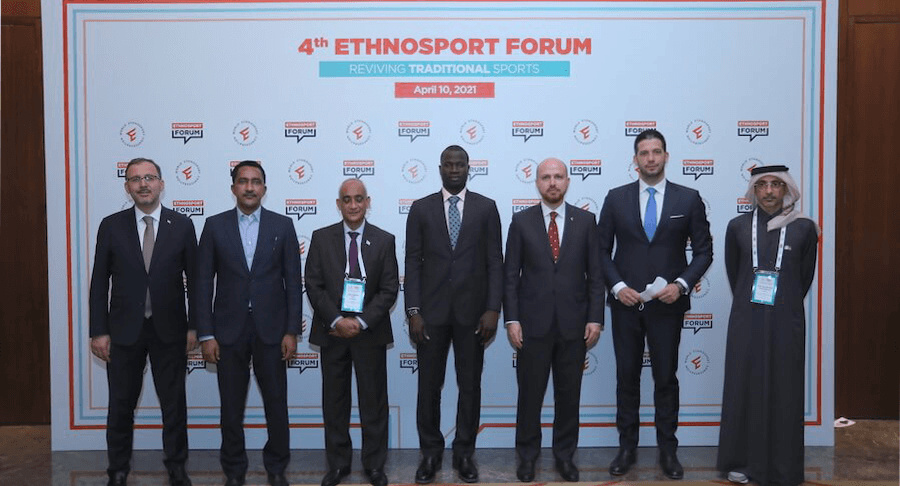 The 4th Ethnosport Forum, organized by the World Ethnosport Confederation (WEC) with the theme ‘’Reviving Traditional Sports,” was held in a hybrid format on April 10 due to the global pandemic.

Nearly 300 participants from 61 countries participated online in the forum; A panel was also held under the chairmanship of WEC President Necmeddin Bilal Erdoğan and the participation of ministers of youth and sports from six countries.

President Recep Tayyip Erdoğan: “Traditional Values and Sports Will Come into Prominence”
Participating in the 4th Ethnosport Forum via video message, President Recep Tayyip Erdoğan emphasized the impact the epidemic has had on societies and stated, “Through the pandemic, we have seen the importance of not only health and healthy living but also of solidarity, sharing, and traditional values.
The dominant mentality that glorifies individuality, ignores spirituality, and despises traditional values has deepened the problems caused by the epidemic.
In the world that will be reshaped post-pandemic, I believe that traditional sports and the culture and values represented by these sports will come into greater prominence.”
Referring to the importance of the forum, Erdogan said, “The discussions to be held within the scope of this important forum through the participation of more than 60 countries will support and guide us in our struggle to keep alive traditional sport branches in the world and the culture and values these sports represent.”

WEC President Necmeddin Bilal Erdoğan: “The Ethnosport Forum Strengthens Our Bonds”
Emphasizing the 4th Ethnosport Forum’s strengthening of intercultural bonds, WEC President Necmeddin Bilal Erdoğan said, “Reviving cultural values is a powerful step for carrying the societies we live within forward.
As the World Ethnosport Confederation, our aim is not only to preserve traditional sports, but also to preserve traditions such as the music and crafts around these cultures.
In this regard, the Ethnosport Forum is an opportunity to strengthen our bonds. We must use our talents and energy to unite around traditional sports.”

Youth and Sports Minister Dr. Mehmet Muharrem Kasapoğlu: “We Must Keep Our Cultural Heritage Alive”
Emphasizing the important position the 4th Ethnosport Forum has in keeping cultural heritage alive, Dr. Mehmet Muharrem Kasapoğlu said, “We should convey our cultural heritage to our young people by experiencing and keeping it alive.
As the Ministry of Youth and Sports, we are increasing our efforts night and day toward the reviving traditional sports and support the efforts done in this field. We believe the Ethnosport Forum has an important place in keeping our cultural heritage alive.”

The Panel was Held with the Participation of Ministers from 6 Countries
At the forum, Ministers from Gambia, Qatar, Mali, Serbia, Somalia and Turkey participated in the Forum interested in the panel, in which WEC President Necmeddin Bilal Erdoğan chaired the session, presented their contributions on the topic “A New Source of Motivation for Youths during COVID-19 and Beyond: Traditional Sports and Games.”

Participation from All Around the World
Held online, the panel was attended by ministers, government officials, federation representatives, and academicians from 61 countries. Throughout the forum, experts in their fields made important contributions to the future of traditional sports.
Participants followed the 4th Ethnosport Forum in 6 different languages on a digital platform dedicated to them.
The event hosted an exemplary meeting during the pandemic in terms of its efficiency and participant diversity in the digital environment.

The Forum’s Carbon Footprint Has Been Offset
Taking action for a sustainable world in order to complete the mission of “Reviving Traditional Sports,” the World Ethnosport Confederation has offset the carbon footprint of the 4th Ethnosport Forum with its vision of respect for nature and the environment.